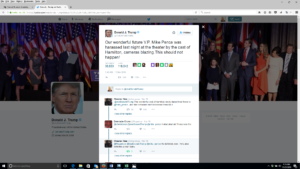 President-elect Donald Trump’s use of Twitter this past weekend to seek an apology from the cast of the hit Broadway musical “Hamilton” provides some lessons for businesses and nonprofits seeking social media hits. Trump tweeted that the cast was “very rude” and had “harassed” Vice President-elect Mike Pence, who was in the audience, by reading