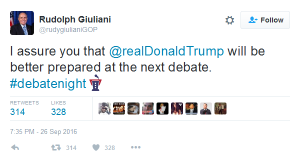 Trumped Up? Three Tips for Getting Your CEO to Prep for Media Interviews

Even Donald Trump’s biggest fans were disheartened by his lack of preparation for the first presidential debate. Shortly after the 98-minute showdown ended, former New York City Mayor Rudolph Guiliani tweeted: I assure you that @realDonaldTrump will be better prepared at the next debate. Former Secretary of State Hillary Clinton reportedly spent four days preparing